It’s called Tachyon Studio. The glorious name refers to a rented out small basement room used for all the rehearsals and recording work for Decline. We moved in here in the spring of 2010 and dismantled the place after the album was finished at the end of 2012. 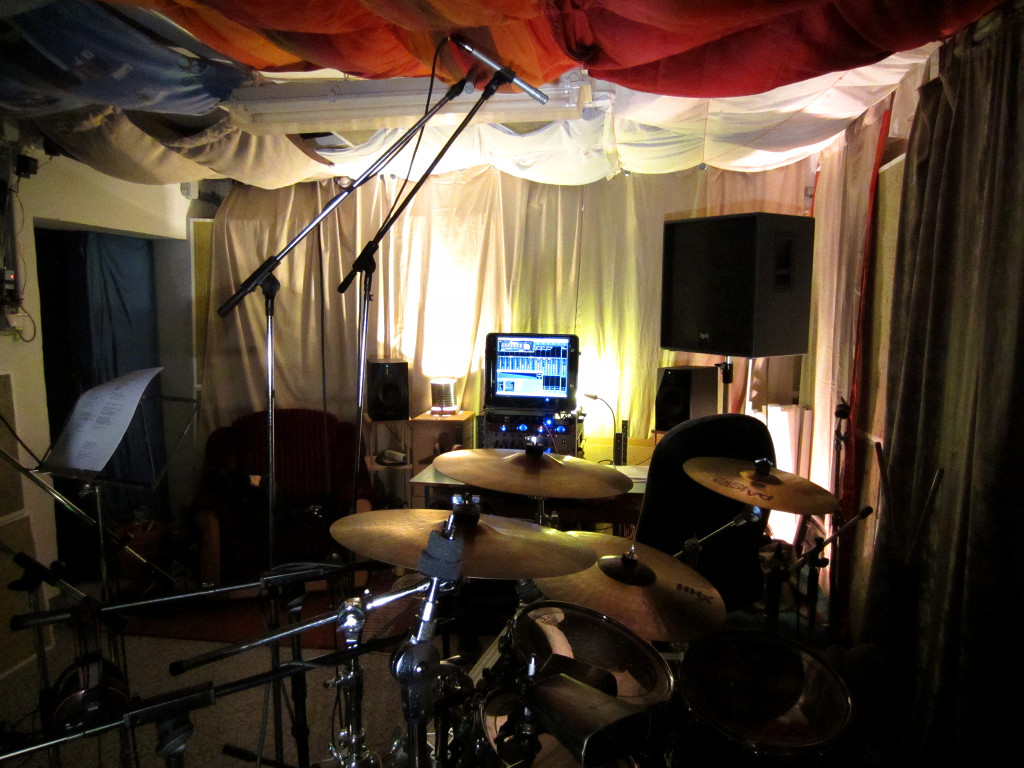 All in one place. It’s very cozy, but a bit small. Because it is basically a bunker (in other words, a hole in a large bulk of concrete), treating the space acoustically has made a huge difference. There are (if I recall correctly) 66 pieces of self-made acoustical absorbers each 60 by 100 centimeters, 4 cm thick. Each panel is a slice of mineral wool hot-glued into a frame of polystyrene (or, actually, the other way around – the slices of polystyrene are hot-glued on the edges of the mineral wool panel to provide a frame). I used two types of mineral wool, one with a density of about 40 kg/m3 and the other with about 90 kg/m3, this heavier one is used in the corners as much as possible. Read this if you are interested in studio acoustics and what you can do to improve yours. Let me tell you, it’s worth every minute you will spend on it. As I already mentioned, you will find these panels everywhere in the room, in corners, on walls and even beneath (most of) the ceiling.

Recording equipment: a self-assembled 8U rack with a PC in it (running Ardour on Ubuntu Linux), featuring an LCD monitor panel built straight into the front lid of the rack (which is fastened to the rack on hinges to make the front lid nicely openable). On the screen, you may notice the window of IR.lv2, the convolution reverb I expressly created for supporting the mixing works of Decline. 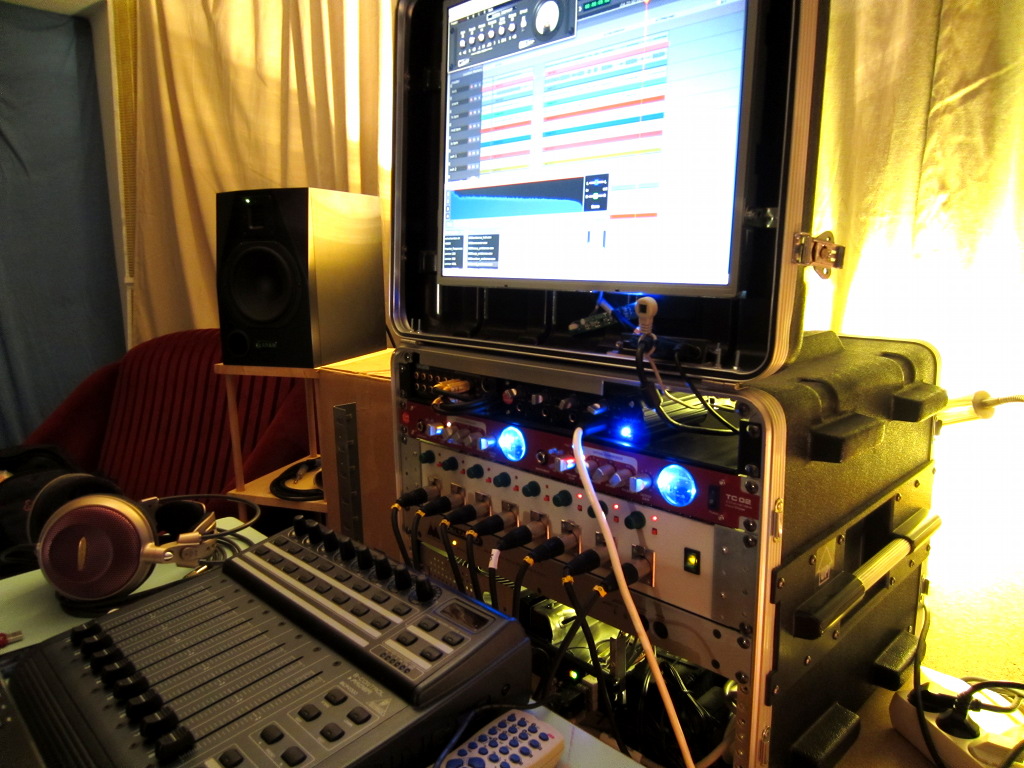 With some hacking I managed to setup a Pinnacle infra remote to control Ardour’s cue & record operations. I can start & stop playback and even recording; stop and delete a bad take with a single button; jump around between position markers etc. The remote enables me to record takes of my own playing efficiently, without having to move back and forth between my playing position and the engineering seat.

I don’t really use outboard effects, just a dual tube preamp with optical compressors. I have a self-engineered and self-built 8-channel microphone preamp which is very transparent and is the workhorse of the studio along with a Delta 1010 rack-mounted audio interface. The preamp is built using Analog Devices SSM2019 op-amps – I plan to publish the electronic and mechanical design of this unit sometime. There is also a TerraTec EWS88MT in the rack for additional audio channels; the two interfaces together provide 16 simultaneous 24/96-capable channels. The two interfaces run in sample-sync via S/PDIF and are trunked into one 16-channel logical interface within Linux via ALSA.

Microphones: I have pieces of SM57, SM58, SM81, Beta57A, Beta58A, Beta52A. I like to record guitar cabinets with a dual mic setup (SM57 and SM81 placed close to each other, phase aligned, about 40 cm from the cab, pointing towards the same speaker cone). Vocals, acoustic guitars and cymbals are recorded with SM81; drums with Beta57A (kick drum with Beta52A). SM58 and Beta58A are only used for live vocal reinforcement. I have a self-made popfilter for studio recording of vocals with SM81, and it works very well.

I use a TSL100 (half-stack with a 1960A cab) for all guitar work. It provides a vast range of tonal options together with my Excalibur. There is a 6+4 channel, 2 x 350W PA system useful for live playing. With the drumkit permanently prepared for recording, and all the amplifiers, stands and cables, it gets pretty crowded.

Studio monitors are Adam P11As. The self-made wooden stand doubled as storage for my external backup harddisk. Check it all out: 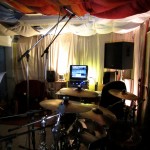 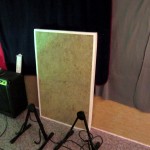 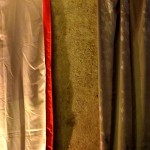 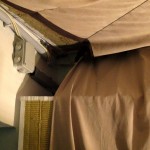 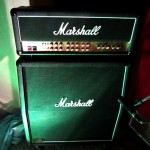 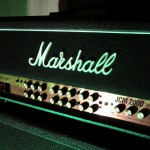 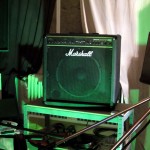 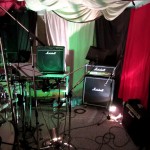 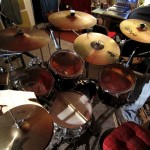 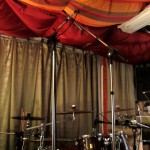 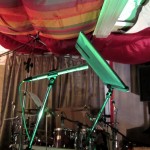 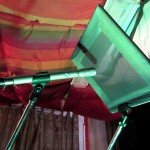 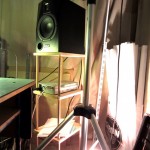 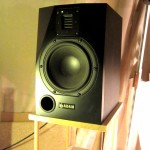 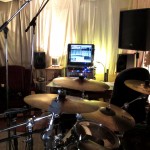 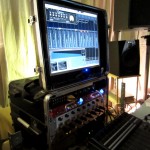 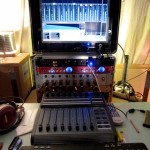 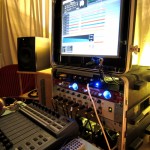 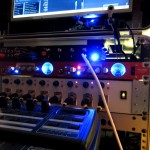 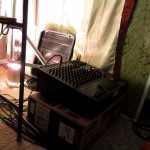 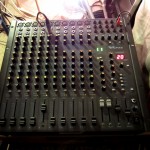 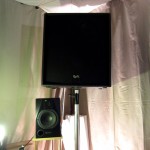