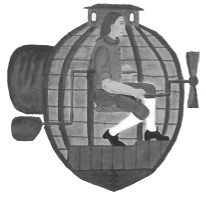 Drench yourself in first-class paranoia

Decline was recorded with my band Submareen during the better parts of 2011-2012. This album undoubtedly contains my best electric guitar work. I was not only guitarist, but also wrote or co-wrote most of the material, including all the lyrics. I was also the person engineering the album. That said, we were an amateur band and the record was not professionally produced, nor did we have the facilities to do so ourselves. This certainly shows in retrospect. At the same time, the album is a testament to our determination to produce something great amidst severe circumstances. Above all the shortcomings and flaws, I’m still proud of the guitar work I managed to do on this album.

You can immediately listen to Decline in its entirety by following the link. You can download it in any format (including lossless) free of charge. The lyrics are available over there, too.

Trivia 1: I used just one electric guitar, the Excalibur, on the whole album. It was recorded through a TSL-100 amplifier with dual micing and minimal effects. Before the guitar solo recordings to finish the last track (Avoiding the 9-to-5 society, which turned out to be my favourite on the album) the TSL broke down, caused by a runaway overheating issue. I needed to service the amp and change all four power tubes just to be able to finish recording the solos that would complete the guitar parts of the album.

Trivia 2: we not only built our own bunker studio to rehearse and record this album, I also wrote IR.lv2, a convolution reverb plugin for Linux, with the primary purpose of supporting the mixing works of Decline.