This is a follow-up post to my previous article comparing Zutty to various other X terminal emulators. That assessment, while going into a lot of detail, missed an important aspect: the typing latency of each program.

On the most basic level, we are talking about the delay it takes for an interactive program (such as a terminal emulator) to appropriately respond to an input event, in this case by altering its screen output in response to the user pressing a key. This is quite fundamental for usability: high latencies tend to affect the user negatively, as the constant lag between user action and perceptional feedback acts as a (perhaps unregistered) mental burden. This article by Pavel Fatin argues for the importance of sufficiently low latencies much better than I could, so I encourage you to check it out.

Clearly, typing latency is an essential metric to consider when evaluating any terminal emulator, and since I had the recent pleasure of inflicting Zutty on a completely unassuming world of innocent Linux users, it is only natural that I also benchmark it to demonstrate how it fits in with other, more established programs. If you are not familiar with my previous article, I encourage you to check it out, as it contains a summary of all programs in my test that I will not repeat here. In short: we will be looking at seven programs in total, tested on the same hardware setup as documented there. The only difference here is that I am testing a slightly newer revision of Zutty (tagged as Release 0.7) with some fixes and enhancements that did not yet exist at the time of my last article.

To measure the typing latency of each program, I used Pavel Fatin’s excellent typometer. This program measures end-to-end latency: it emits keypress events and captures the screen to note when it gets updated (as actually visible to the user), and this is clearly the right thing to do (check out Pavel’s cool article with lots of detail on various components of latency).

The default measurement settings were used (200 chars with 150 ms delay, using native API) with the exception that I also enabled async mode. I did this to decouple the periodicity of typing from the display lag, and also because in my experience it produced less noisy results. To measure only essential latency induced by the programs themselves, I ran each of them full-screen (without any window decorations, their client area being equivalent to the root window) for the time of the measurement in a non-compositing, lightweight tiling window manager (i3). The screen resolution was 1920x1080 and the LCD refresh rate 60 Hz. The machine was not running anything other than the programs involved in the measurement. 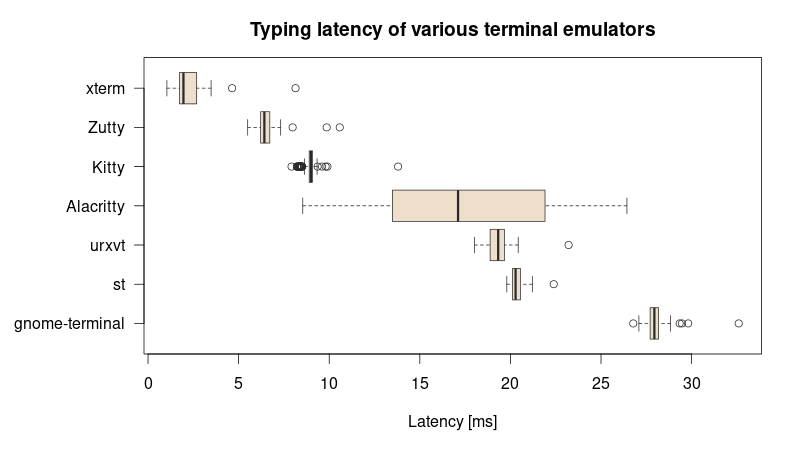 Graph data in tabular format (all numbers are milliseconds):

The figures pretty much speak for themselves, so I will leave it up to you to draw your conclusions. Some of my own points though: