Running remote X applications is extremely common in the UNIX world of remote administration. Using ssh -X to log in to a remote system and launch graphical programs there is easy and convenient. However, it does not always work. This article describes a method that will work in case ssh -X won’t do.

If you are lucky, you can use ssh -X to log in to the hosts, one after another. But this requires that all the intermediary hosts as well as the target has an SSH daemon running that is configured with the X11Forwarding option enabled. Another requirement is the presence of X libraries on all these systems – and since it is customary for the intermediary gateways to be headless boxes, there is a good chance that at least one of them will lack the capability of out-of-the-box X11 forwarding. And no, you have no root access to turn it on.

Even if none of the above obstacles stops you from using ssh -X, it may still not work. Random programs just refuse to start up, giving some X related error such as this:

So what means do you have to robustly access remote X applications? The solution is to use the generic SSH port forwarding facility to tunnel the traffic through the nodes, to emulate the effect of the -X option, even in cases when it wouldn’t even work. The difference is that the TCP port forwarding feature of the SSH daemon is much more commonly enabled, and no X libraries have to be present on the intermediary hosts.

SSH (the client) is a program for logging into a remote machine and for executing commands on a remote machine. It is also capable of forwarding X11 connections and arbitrary TCP ports over the secure channel. Since we’ve ruled out X11 forwarding, let’s focus on TCP port forwarding. Spending time on mastering this powerful tool is worthwile, since it can be used in a range of other common scenarios as well, as you shall soon see.

TCP port forwarding comes in two modes of operation: local port forwarding (enabled by the -L command line option) and remote port forwarding (-R option). Understanding these options can be a bit tricky (and the SSH manual page is quite terse), so let’s see some examples.

Perhaps the most common use for local port forwarding is firewall piercing from the inside. Let’s say that Joe at Mega Widgets Corp (a large international company with strict HTTP filtering and firewalling) wants to download a few files from the outside network. For the sake of simplicity, let’s assume that the files are available via HTTP. As usual, outbound HTTP traffic to the sites really worth visiting has been precautiously blocked by the network admins. However, outbound traffic on port 22 (SSH) is not blocked, and Joe has a home system running, from which the outside network is accessible. Joe is able to login to his home system from Mega Widgets via SSH.

In this case local forwarding enables Joe to designate one of the local ports (on his work computer) and establish a tunnel from that local port to a remote location (in this case his home computer). Traffic originated from his work computer sent to the local port will be tunneled to the remote end. The destination where this traffic will be sent is determined by the command line options with which the tunnel is established. The following figure serves to clarify our discussion. 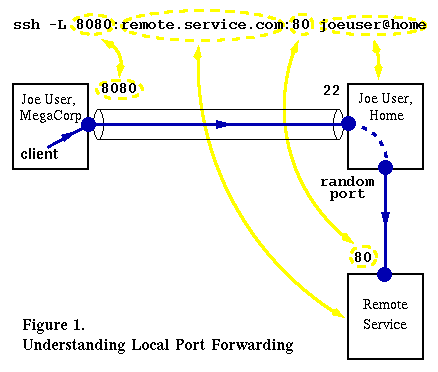 After Joe has issued the SSH command in a terminal window and typed his password for his joeuser@home account, he has an SSH tunnel between his work and home machines. This tunnel accepts connections from the local (left) end on port 8080 and transports them on the secure channel to Joe’s home machine, connecting to the standard TCP port where the SSH daemon is listening (port 22). The SSH daemon at the endpoint of the tunnel makes connections to the remote service provider’s port 80 (standard HTTP). The connection originates from a free local TCP port on Joe’s host machine – this is the originating location of the request that the remote server is able to see.

Using the tunnel is easy: Joe sets his browser to use a proxy server at localhost:8080. This means that outbound HTTP requests will be sent to the tunnel’s left endpoint, securely transported to the other end, where a connection is originated to the remote destination. Replies from the remote server will be sent back on the same path. Note that while the tunnel secures data transport between its endpoints, data between Joe’s home machine (the proxy) and the remote server is sent in the clear.

Now let’s suppose that Joe wants to keep an eye on his downloads during the weekend, and hence needs a way to access his work computer from home. Again, the company firewall prevents all inbound connections, but allows outbound SSH connections on port 22. In this case remote port forwarding allows Joe to leave his workplace on Friday with a tunnel established between his work and home computers, allowing connections on the remote end, thus allowing him to access his workplace from home, as depicted by Figure 2: 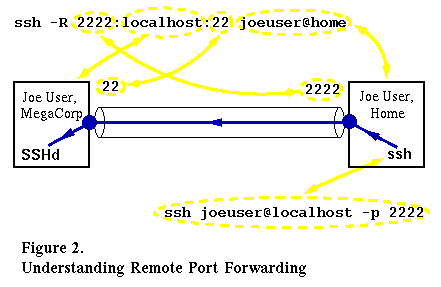 The tunnel forwards connections made to port 2222 on the remote end to the local end, where a connection is originated to localhost:22, that is, the local SSH daemon running on Joe’s workstation. In this case Joe has not exploited the possibility that the destination host to forward to could be something other than localhost – that way the tunnel could forward traffic to another host on the company (or even outside) network. But just as with our previous local port forwarding example, he could have done that here as well.

Using this tunnel is also easy: when at home, Joe initiates an SSH session to localhost:2222 with the command also shown in Figure 2. The SSH client connects to port 2222 of his home machine. Since this is the remote end of the tunnel, the connection is transported to the local end, which is on his work computer, and forwarded to port 22 of localhost (the same machine) there. The result is that Joe is able to login to his work computer from home.

Back to X tunneling

With a solid understanding of how SSH tunnels work, it is now trivial to set up an SSH tunnel with the aim of X forwarding. What we want is a (secure) channel between the remote host (on which X applications run) and our local machine (on which the X server runs). We want the X apps to be able to connect to the server, so the tunnel has to accept connections on the remote end. Thus, we have to use remote port forwarding. And since we want the requests to reach our local X server, we have to designate a forwarding destination of localhost:6000 (assuming we want to use X display 0). The port numbering scheme of X is 6000+n where n is the display number. So if you use a display other than the first (0-th), then use the corresponding port instead of 6000.

What port should we configure for the remote end? It should be a port that corresponds to an X display number, one that does not yet exist on the remote host. We need this because when configuring the remote applications to connect to the appropriate X server, we need an X display number instead of a TCP port number. Let’s say that display 99 is free on the remote server. In this case the complete command for establishing the tunnel:

After establishing the tunnel (which, by way of the above command, also yields a terminal opened to the remote host) we have to tell the applications on the remote end to connect to display 99 on that machine. To do this, set the DISPLAY environment variable to 127.0.0.1:99 in the remote terminal. In bash or ksh this can be accomplished by typing export DISPLAY=127.0.0.1:99.

Another nuisance is that the local X server mush accept incoming TCP connections. Since local applications normally communicate with the X server via a local socket instead of TCP, this is generally considered insecure and thus frequently disabled by default. If the X server is started with parameters that contain -nolisten tcp, then TCP connections have been disabled and settings have to be changed. Unfortunately, how to do this is vendor (distribution) dependent.

The final step to be taken before remote X applications finally work is configuring the X server to accept connections from the specific address of the tunnel endpoint. Enabling incoming TCP connections is a general X configuration issue, but even with that out of the way, X still has an access control mechanism that maintains a list of those hosts and users that are allowed to connect. The xhost command is used to add or delete hosts or users to the access list. In our case, since at the local end of the tunnel connections to the X server appear as coming from localhost, what we need is issue xhost +localhost. After that, I like to test whether the connection really works by starting xclock, a small X application. And voila: 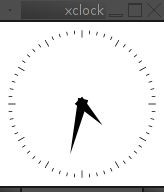 We can take all this a step further and establish a tunnel through an arbitrary number of intermediary hosts (gateways). The tunnel in this case is really a chain of tunnels between any two adjacent hosts. For the sake of example, let’s assume that apart from my home machine, there are three machines called red, blue and black and that I can only access them in this order, i.e. I can only access red from home, only blue from red, and only from blue can I access black, where I actually want to run some X app. Let’s assume that I have an account for tom on all machines. Assuming that TCP port 6099 is available on all hosts, the following commands will give me a terminal to black from which I can start X applications:

This works even if red and blue don’t even have X libraries. And naturally, X11 forwarding is not required from any of the SSH daemons involved. I have added -C for data compression in the tunnel; in my experience the connection might break without it every now and then if the vendor (or even version) of the SSH daemons is different.

Continuing my example with the above hosts red, blue and black, let’s assume there is a super secret HTTP service running at black:8080 that I want to access from home. In this case I have to establish a tunnel with local forwarding, since HTTP requests will originate from my machine. Let’s say I want to use port 8099 for the tunnel. Here’s what to do:

… and, in my locally running browser, connect to http://localhost:8099 which is the local end of the tunnel. This will allow me to access the HTTP service that is running behind multiple layers of gateways (presumably firewalls that I somehow have access to, but that’s not the point).